November 8, 2018
Ladies and gentlemen SBH is about to embark on something that we have never done before. Something that has the potential to launch this gig from hobby status to a real legit business. Something that could change the direction and pace of our lives as we know it.
We are about to attempt… TWO PROJECTS AT THE SAME TIME!!!
via GIPHY
What?!?! you say. I KNOW! Crazy huh! It’s like I’m a real contractor or something. But just think… If I can pull this off then I could potentially do a flip (my true love) and a contract project (aka a project that actually provides a paycheck) at the same time thus keeping me and my creative side happy and Rory and his profit/loss spreadsheet happy. I realize that this feat is nothing to real builders who can crank out entire subdivisions in their sleep, but I have been extremely nervous to try more than one project at a time because I know how much time and energy goes into ONE SBH. When I multiply that amount by two it does not fit within the 24 hour/day allotment of time much less leave room for family, friends, food and/or freaking sleep. (Sorry for the expletive, I was going for a literary alliteration there with the “fs”.) BUT I am still riding the high of my successful contract project on Oliver and 1 of the 2 projects will be our own home on Carl Stuart so I’m thinking now is the perfect time to give it a try.
And do I ever have the perfect client/contract project to work on! This young man approached me last April when I first put the word out I was looking for a pre-reno buyer at Oliver. Unfortunately, he was about a week too late to get in on that project, but about a month later he contacted me about a house he found on Davis. He asked me to look at the house with him to see if I thought it had storybook potential. At that time I was in the early stages of working with my very first clients (at Oliver) and still unsure if contract work was for me so I was hesitant to even go look at the property but my love of old houses and curiosity to peek inside this particular one got the best of me and I agreed to a walkthrough. Well, I should have known better…. it’s impossible for me to go inside an old abandoned home and not start daydreaming about what I could do to help give it a fresh new story, and this one had enough quirkiness to send the imagination in overdrive. But despite my infatuation with the house and it’s potential I was nervous to take on another client project and was prepared to give him a recommendation for another reputable contractor when he said the following words that I am apparently powerless to say no to:
“I wouldn’t want to see the project until it’s finished- I want you to surprise me.” (the yellow highlight represents rays from heaven shining down on that statement)
Ummmm, Seriously- all the control, a dramatic reveal, AND a guaranteed paycheck….. I had to pinch myself to see if I was dreaming. I agreed to take on the project with the understanding I would not be able to start his project until I finished Oliver. We finished Oliver on Friday, Aug 24 and started demo at Davis the following Monday.
Although he wants to be surprised and has given me free rein on all the design decisions, he did share with me his love for the French Quarter of New Orleans and requested the design reflect that style. Now, normally a request for a specific style would stress me out because I like to let the house dictate the style BUT I’m super pumped about trying a new genre and after spending time with Davis it turns out he (the house) speaks fluent Cajun! Plus! I have always wanted to go to NOLA and I’m thinking this project will be the perfect excuse for a field trip.
Although demolition is already done, I did remember to take some before pics before we knocked down any walls. So here is a little lagniappe for your blog reading pleasure. Let’s geaux… (oh my goodness, this is going to be fun)
Here he is: 705 Davis 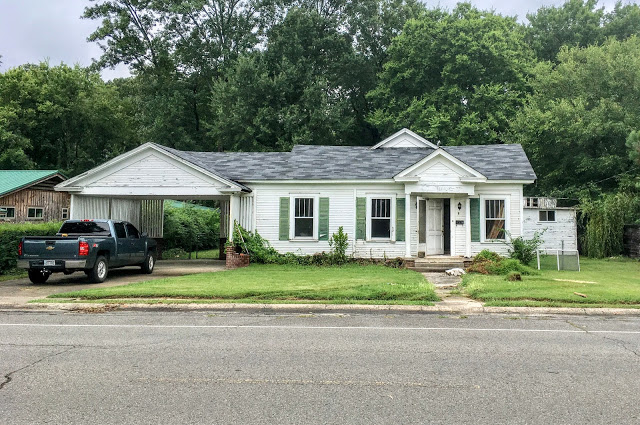 Recognize him? He sits proudly across the street from First Baptist on Davis Street and has been there since 1937. For an 81-year-old he has held up pretty good. He currently occupies 1624 sq feet of livable space which does not include the obvious add-on to the right of the property or the creepy attic space bonus area.

I did not get a picture of the creepy attic space so you’ll just have to trust me on that one.

Part of our renovation plans for this house involve demolishing the current lean-to structure and rebuilding an addition more in keeping with the original style of the home… kinda like this:

Before we move this tour inside I’ve got to show you the back/side yard:

That space right there is going to be home to the coolest New Orlean’s style courtyard. I’m dying to tell you more but I think I’ll keep it a surprise for now.

Let’s go on inside, shall we. 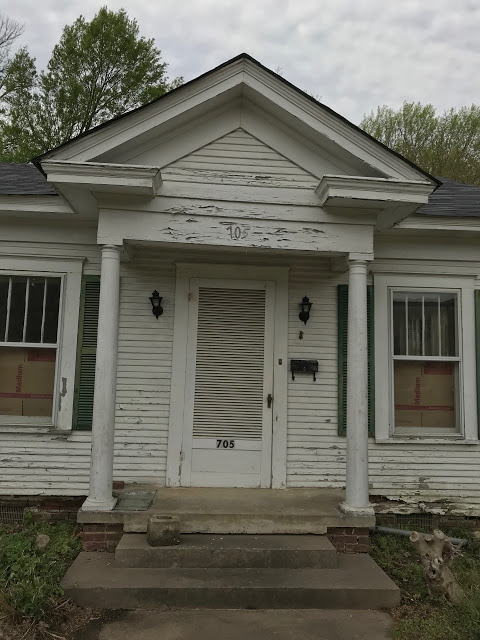 Inside the front door, space is plentiful but a little awkward. There are only 2 bedrooms but 3-4  living rooms.

Here is a picture of the floorplan I sketched out to help you navigate this tour. 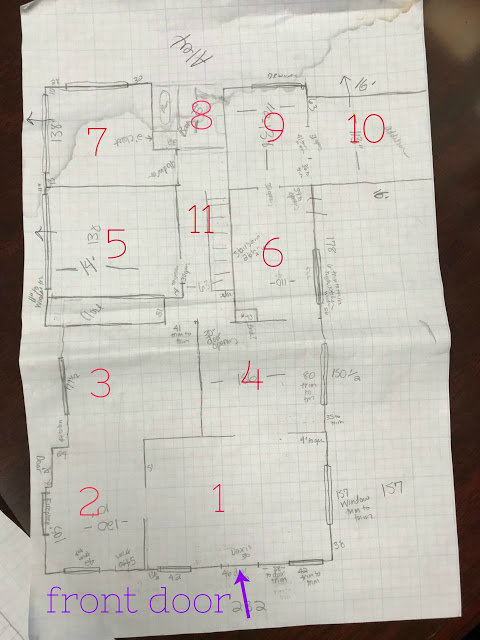 You enter thru the front door into room 1:

This front door location was one of the biggest obstacles to figuring out the new layout. Currently, it opens into one of those 4 living spaces I told you about. I wanted to create a defined entryway but struggled to figure out what to do with the space the entryway would create to the left of the door. Don’t worry, we figured it out, but not without several sleepless nights.
Room 2, (pic taken from room 3) takes you to another living area. This one is small and narrow but has the most character thanks to a cute fireplace and built-in. It is also where you enter the home from the carport.

#4 could also be considered a living area but most likely was used as a dining room because of it’s proximity to the old kitchen.

I’m going to go ahead and give you that map again so you don’t have to keep scrolling back up before we continue on our “before” tour. 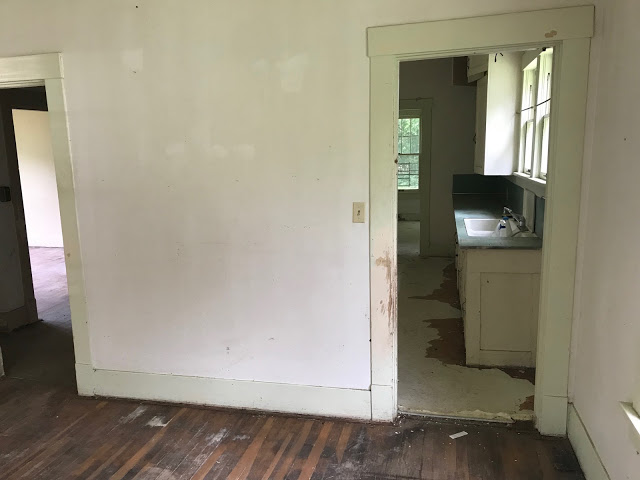 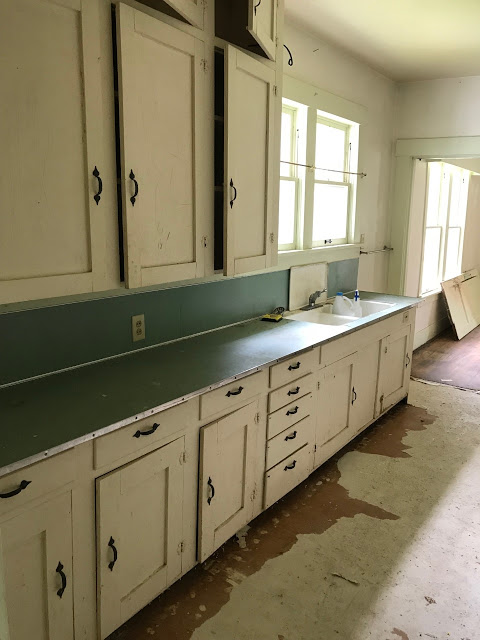 It was a galley style kitchen and I absolutely adored those cabinets. Unfortunately, we lost the cabinets during demo because they stubbornly refused to come off the wall in one piece. This homeowner desires an open layout so we will be relocating the kitchen to the old dining room (#4) during the renovation but have some really fun plans for the old kitchen.

#8 is the main bathroom of the house:

I’m thinking #9 was a laundry area and also housed the hot water tank.

And finally, we will end our tour with #10 the bathroom lean-to addition. 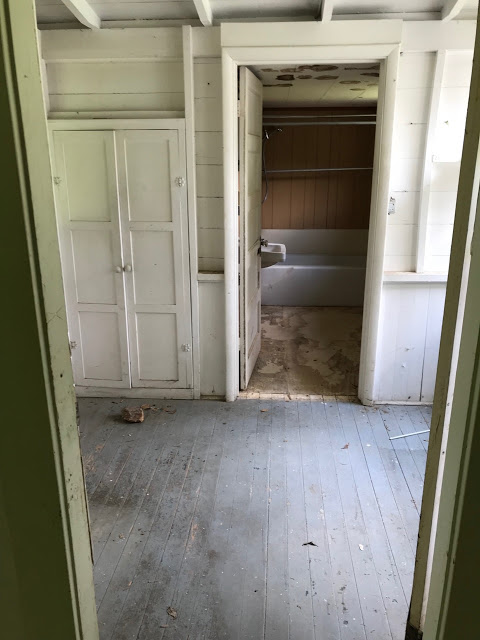 And now that you have a better understanding of the old layout forget everything you just saw because pretty much the entire house is getting rearranged during the renovation. Numbers 1-4 will be opened up. Number 6 will be moved to number 4, Number 6 will become number 9. Numbers 5, 7 and 8 will be combined to become an awesome master suite. Number 9 will become a guest bathroom for two new bedrooms that will be added where number 10 used to be.  It’s going to be fun!