May 7, 2018
Today is my birthday…. well I should say, “when I started writing this blog post it was my birthday.” If this post goes like all the rest, I will be well into my 40th year of life before I finish it and hit publish.  But anyways, I tell you this because last night Rory, with the help of some of the best friends a girl could have, threw me a surprise party in our future home. It was so sweet and could not have been a more perfect way to kick off this next chapter of my life and home.

Cake Cred to Patty Cakes. Is it not the cutest!?!  Look at that little carhart hat and SBH t-shirt.💓
“Wait?!! What?!?!” you say.
Yes, it’s true…. I am 40 YEARS OLD! Hard for me to believe too….. Huh? What’s that you’re saying? Oh…, that’s not the part that surprised you? Oh!!! You want to know about our future home.
Well ok, but I’m going to need to take you back several months to get you caught up. so let’s get started…..
Last year, after the dust had settled from the sell of Caldwell, and I had brain space to process that we had actually really attempted to sell our beloved home, the idea of moving started to sink in, and it kinda got me excited. You see we have lived inside the walls of Sister for the last 9 years, which is a long time for the Thompsons. Prior to this home, the longest we had lived in a home was 4 years and the shortest was 7 months. Our past moves had been motivated by a need for more space and/or an itch for a new project. But with Sister, we have had all the space we need and thanks to the birth of Storybook Homes my project cup overflowith, so thoughts of moving had not crossed our minds…. until it became part of our back-up plan to stay financially afloat during the Caldwell renovation. (If your new to the blog, you can read about that plan here.)
Once the idea of moving was rooted in my head I pitched the idea to the family. On an excitement scale of 1 to 10 here is how my family ranked on the thought of moving:
Colby- 2,
Cohen – 9
Rory- 5
Me- 9.999
So with an above neutral average I took that as a sign to officially begin our house hunt. To help elevate all excitement levels and to live out my House Hunters fantasies I took an inventory of everyone’s wish list for the new house.

Colby
⬜ Within biking distance to school and friends.
⬜ Workspace for Colby’s Creations
⬜ Mancave (excuse me while I try not to roll my eyes)
Cohen
⬜ Carl Stuart school district because that is where the majority of his friends from sports and church will be going
⬜ Basketball goal (inside room and/or outside)
⬜ Mancave (I’m not even going to try to hold back an eye roll…he’s 10 years old!)
Rory
⬜ Tiny House – “we just need to get rid of a ton of “junk” (aka all Niki’s seasonal decor and stock pile of home goods) and live simply”
⬜ next breath… “I need my own personal office, a personal storage room for all my hunting/camping gear, a large garage with NOTHING but cars in it.” (quotes from Rory)
⬜ New construction (shot to my heart)
⬜ Land for a horse and donkey
⬜ and of course (say it with me….) A mancave.
Niki
⬜ Must be a fixer upper! The uglier the better
⬜ Must be cheap! I want a large budget to work with
⬜ Want enough land for a shop- I’m tired of driving across town to get to my tools
⬜ Close to Kroger! Once you have lived within a mile of Kroger, you can’t go back!
So with my House Hunter wish list, I started the hunt! At first, I stuck with the traditional routes of finding a home: realtor, zillow.com, realtor.com, and drove the city looking for sale signs. But after a few months of coming up dry, I expanded my search to homes NOT currently on the market. That’s right, no home was safe from me trying to purchase it. If it met a large chunk of my family’s wish list, I would AR County data the property to find out the name of the unsuspecting home owner, then I would use my sleuthing skills to track the owner down on FB, and last I would send them a message asking if they would consider selling me their house. While waiting for the owner to respond back I would draw out a dream floor plan based on the perimeter footprint provided by AR County data, and I would daydream about how I would decorate and furnish it. Not creepy at all! Surprisingly, not one person was willing to sell me their house*
* If you were one of the people I approached about buying your home, I promise I am harmless. But should you ever decide to renovate, I have a plan already drawn out and a full Pinterest board I’d be happy to share.
Because I let myself become emotionally attached to each home I approached, each rejection took a toll on my spirit and I was beginning to get really discouraged. Then one cold morning in February, on an early morning run, I ran across a FSBO (For Sale by Owner) sign. Now, you should know, that I am the most oblivious runner (and driver) on the planet. You could come within 1 inch of running me over and I won’t notice but I can spot a FSBO sign a mile away!

What is crazy about this particular property, was that I had literally been running past this house since my college cross-country days (20+ years) and I had NEVER noticed its existence before. I snapped a picture of the phone number and then I waited and watched the seconds tick by for 2 hours until it was an acceptable hour to call the number on the sign. No answer. I left a voicemail, then a text, then another voicemail just for good measure. Finally at 2pm that afternoon I got a call back from the owner and we set up an appointment to see the property later that afternoon. While on the phone she warned me that the house was very dated and would need some work… I tried to play it cool but inwardly I was doing backflips…. “dated and needs work” are 2 of the most important qualities I look for in a home!
My parents were in town visiting, so my Mom and Rory went with me to look at the house. The house was dated but minus the stained carpet it was very clean by storybook home standards (in other words, it didn’t stink). I tell you what…. instead of just describing it, I’ll take you on a quick tour of what we saw:
When we stepped inside the front door we walked directly into the carpeted living room.

Here is another picture of the Living Room.

The living room is open to the dining area…

Here is a close up of the kitchen.

Off the dining area there is a powder bath 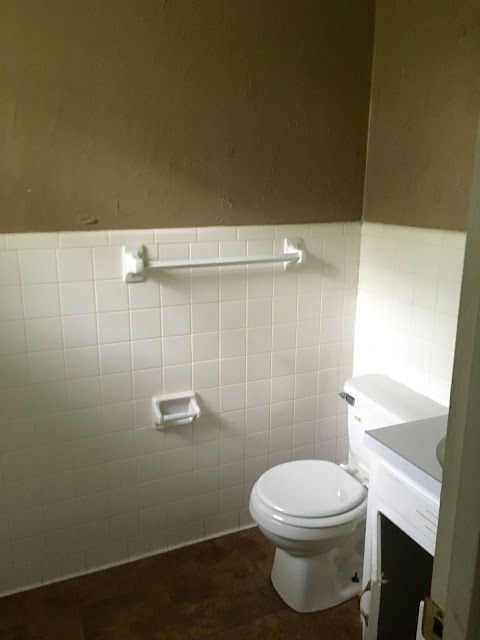 Then down the hall… 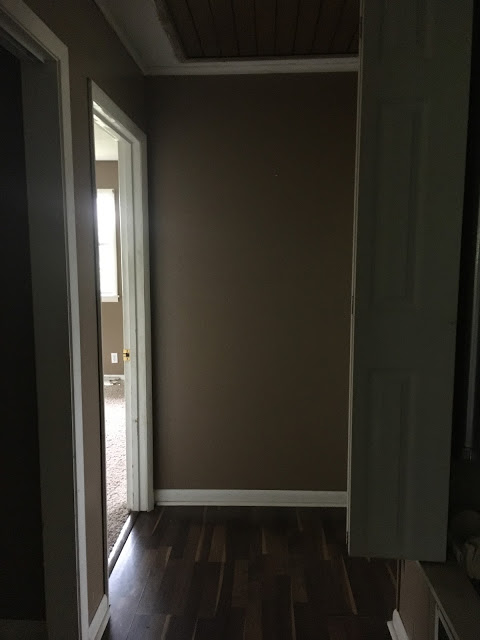 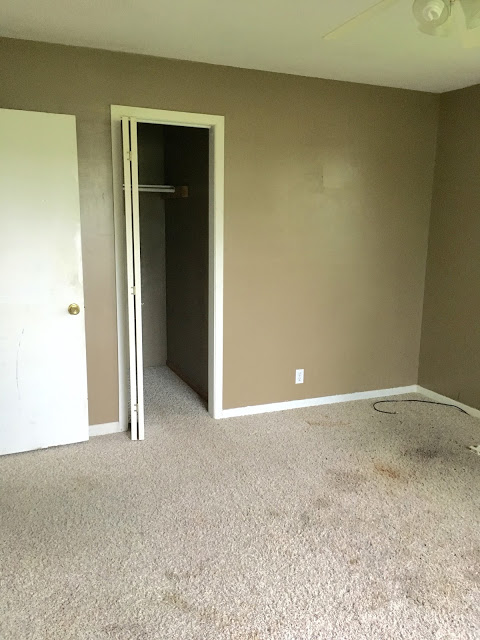 and a full bathroom 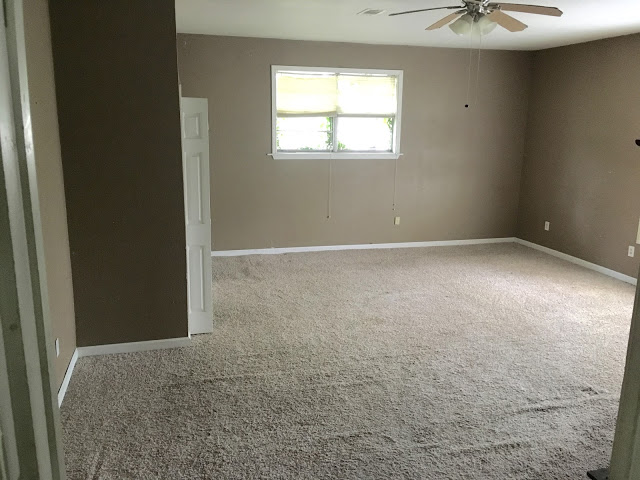 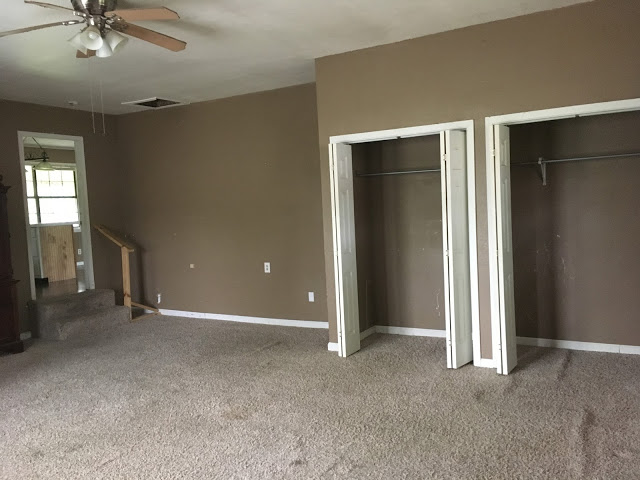 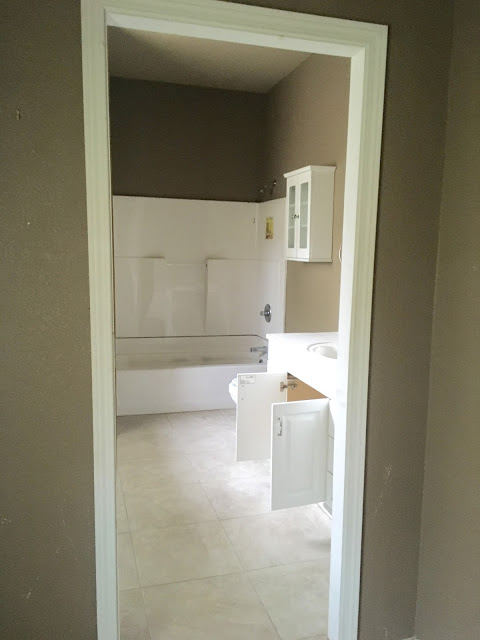 Do you recognize this house? Do you know why our friends might have been a little concerned about its location?