April 21, 2017
While I am on a forced project strike, I thought I might take this time to introduce you to 3 members of our Storybook team that we literally could not go anywhere without.
First up- Rusty.
You first met Rusty during my 2017 New Years post. Rusty is the “before” mascot of Storybook homes. He is a 1998 Chevrolet but has only been with us for the last 13 or so years. Before the odometer light burned out he was running around 230,000 miles (that was in March 2016).
Y’all, the only reason I am going to confess what I’m about to tell you is because I think it clearly demonstrates how much I NEED a project and should not be left alone with free time- I totally went driving around Conway looking for a field of daisies in which to photograph Rusty just for this post. Seriously?!?! In what Universe is that a worthwhile use of time or gas?!?! Thank goodness we don’t have any daisy fields because the second part of my plan was to pose all sports-car pin-up style in my Carharrt overalls on Rusty’s hood. Luckily the field of weeds I settled on snapped me back into reality.  But not before I took these glamor shots of Rusty: 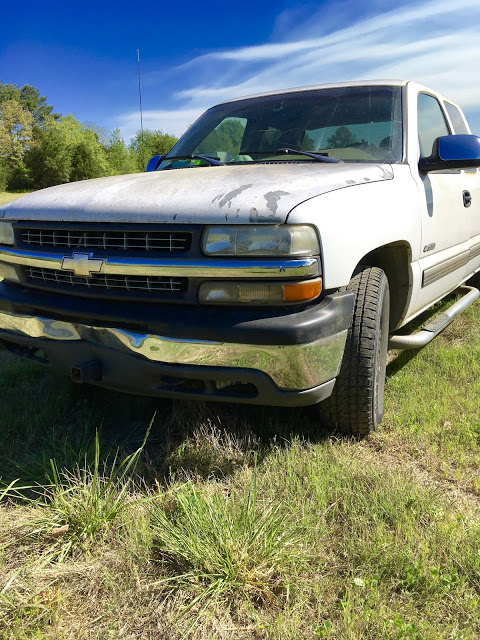 Before I continue, I would just like to go on record that I am responsible for ZERO of those dents or scratches, thank you very much.
I’m convinced Rusty is a distant cousin of Herbie the slug bug because he truly has a mind of his own. He is constantly coming up with new tricks to ensure my driving experience is never boring. For example, for the past 14 or so months he will randomly throw open the driver’s side door while I am driving. The first time it happened I was in the middle of a week-long “While You Where Out” surprise bathroom renovation for Rory while he was away on a mission trip. I had crews working inside my master bathroom from 6 am in the morning until after midnight for 6 days in a row so I thought I was just sleep deprived and forgot to shut the door. It wasn’t until it happened again when I was fully alert that I realized it was Rusty’s doing and no fault of mine. It has since happened enough times that I have trained myself to drive with 1 hand on the steering wheel and the other hand gripping the window seal to hold it shut (I can’t hold on to the door handle because it has started to detach itself from the body of the truck so should the door fly open when moving greater than 10 mph I fear it would rip right off).
He loves an audience. Somehow the ignition always seems to stick in the Home Depot parking lot when we are parked next to a work truck full of men. Rusty knows the only way I can make the key turn over is if I do a little shaking and dancing in the driver’s seat or straight up body slam into the steering wheel. I’m not sure who enjoys the performance more, Rusty or the men watching from their vehicles.
He is also quite the host. Each Spring he welcomes a colony of ants to take up residence in the passenger side floorboard and last week he extended the invitation to a family of wasps.
The good news is when you drive a vehicle like Rusty you don’t have to worry about anyone trying to steal him. In fact, the only time I have experienced any suspicious activity around Rusty was the time I came outside of an equipment rental dealership and found a man underneath my driver side tire.
Turns out he wasn’t lying in wait to steal Rusty or me he was simply zip tying Rusty’s front bumper back on. Who knew a simple zip tie could fix a bumper that had been hanging down for over three years?! AND he even gave me a package of zip ties just in case anything else fell off.  Modern day good Samaritan right there folks.
But my all time favorite memory of Rusty was the time he grew a tomato plant in his bed.  I think he did it just to show me up because that was the year I couldn’t get a thing to grow in our real garden.

Next up we have Wonda the Honda.

She is practically a baby at only 184,000 miles.
Wanda is my go to errand car when I don’t need to haul tools or my errands take me on the interstate where I’m a little terrified to drive Rusty with the whole door flying open trick. She isn’t all that fancy but she gets the job done. Unfortunately, when I am knee deep in a project she gets a lot of Rusty’s overflow junk so it’s not uncommon for my kids to be seatbelted in on top of leftover tile or riding with a light fixture in their lap. You know it’s bad when your youngest kid asks you to drop him off before you get to the official drop off spot so teachers can’t see inside your car.
Until recently Wonda has been a pretty drama free vehicle but I’m thinking Rusty might be rubbing off on her because for the past month or so her trunk won’t latch.  I really didn’t think much of it until I walked out of Sams on a windy day and was greeted by this:

There was Wanda with her trunk wide open all Loud and Proud for all the shoppers to see. Rory has begged me to take her in to get fixed but I figure I’ve got better things to do with my time and money so I fixed her myself!

I thought the bungee cord was so much more classy than duck tape. Only problem is, now when I go over a speed bump and the trunk pops open the force of the bungee cord is so powerful it sounds like a cannon is going off from my car.  I am sure the people of Smoking Oaks would really appreciate it if I would go ahead and get her fixed or at the very least find another route home.
And finally, there is the jeep aka Rory’s mid life crisis purchase.

He’s a stud huh? Rhino Lined with a luggage rack and a cool red hook thingy.  We like to refer to him as the “after” mascot for Storybook Homes.

Now before any of you start thinking “Why does Rory get the nice vehicle while Niki drives the clunkers?” you should know that prior to the Jeep Rory drove Rusty then Wonda while I had the nice ride.  This is the first nice vehicle Rory has ever bought for himself. And he deserves it!  Unlike my job, his job actually brings home a paycheck.
Honestly, I wouldn’t want the thing. Oh sure it’s fun to ride around with the top down listening to Florida Georgia Line’s “Cruise” cranked way up but I could not handle the added responsibility that comes with driving a jeep. I’m not sure if you know this or not but there is an unspoken pact between all jeep owners that when you pass another jeep on the road your suppose to do this subtle finger wave from your steering wheel. It’s kinda like a secret handshake or something and they ALL do it! Well, I gotta tell ya, it stresses me out. I am the most oblivious driver on the planet and am NEVER aware of anything going on around me (half the time I don’t even remember how I got to a destination) so I have no doubt I pass other jeeps all the time and don’t return the obligatory wave which I’m pretty sure in jeep world is the equivalent of giving someone the finger.  Which I would NEVER knowingly do, although I’m quite confident my driving has been the recipient of a few birds over the years- but hey I wouldn’t know because I don’t PAY ATTENTION.
Plus when you drive such a spiffy vehicle you tend to draw attention to yourself and not just from other jeep drivers.  I forgot about this side effect last week when Rory and I switched vehicles for the day and I took Cohen to school in my polka dot pajamas.  Yep, couldn’t help but notice those stares.
So there you have it, consider yourself formally introduced.
I hope to be back to blogging about houses real soon!

2 thoughts on “The storybook team”